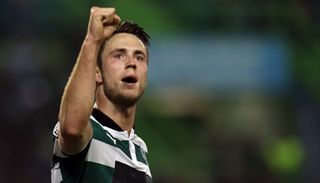 Van Gaal is without 12 regulars who have been called up to the Dutch under-21 squad to play in the Euro finals in June in Israel.

He called up Miquel Nelom, Lerin Duarte, Jens Toornstra and Ricky van Wolfswinkel (pictured), as well as several players who are no longer regulars in the Dutch squad.

Netherlands play Indonesia in Jakarta on June 7 before they travel to Beijing to face China four days later.