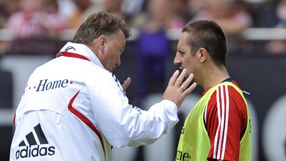 Frenchman Ribery played some 75 minutes during a friendly match against Unterhaching on Wednesday after his brief Bundesliga comeback last week against Nuremberg, but his coach was less than impressed.

"He did not put in any effort (against Unterhaching) and showed no commitment. That is a shame," Van Gaal told reporters ahead of their trip to second-placed Bayer Leverkusen on Saturday.

Ribery was included in a makeshift Bayern team featuring professionals and amateurs following his absence since September 21 due to a torn right ankle ligament.

He set up one goal in their 2-1 win but Van Gaal was unimpressed.

"None of them put in much effort but least of all Ribery," said the Dutchman. "He caused no confusion at all. I am not organising these games for myself."

Bayern are in sixth place in the Bundesliga on 19 points from 12 games after a rocky start to the season marked by the absence of several key players including Ribery, Arjen Robben and strikers Miroslav Klose and Ivica Olic through injury.