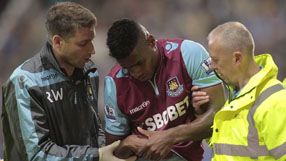 Vaz Te dislocated his shoulder during the 3-1 defeat by Arsenal 10 days ago.

Vaz Te scored a late winner for West Ham against Blackpool in last season's promotion play-off final, returning the club to the top flight after a season in the second tier.