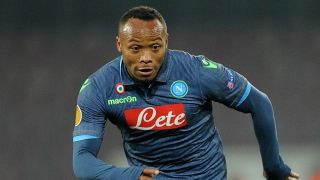 Juan Camilo Zuniga has signed for Watford on a season-long loan deal from Napoli, the Premier League club have confirmed.

The attacking full-back arrives at Vicarage Road to reunite with head coach Walter Mazzarri, under whom he played for four years at the Stadio San Paolo.

The deal for the 30-year-old includes an option for Watford to make the switch permanent at the end of the season.

Zuniga played 163 times for Napoli and has 62 international caps for Colombia.