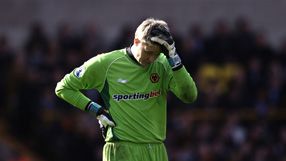 "Closer examination of the problem has confirmed damage to his cruciate ligament - a setback that is set to keep him out until the autumn," a club statement said on Wednesday.

Wolves are eight points adrift of safety with four games left this term after a dreadful run.

Wales international Hennessey, ever present for Wolves this season, has also lost any chance of being selected in the British team for the London Olympic football tournament in July and August.