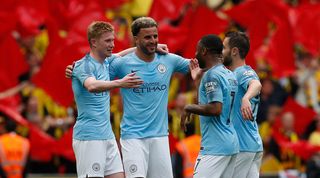 The semi-finals of this season's FA Cup have been confirmed, following the weekend's action in the quarter-finals.

Current holders Manchester City will meet Arsenal in the first semi-final on Saturday 18 July with the game shown live on BT Sport.

That game is set for a 7:45pm kick-off and as is custom, will be played at Wembley Stadium.

The 2020 FA Cup final will be broadcast on both channels on August 1.