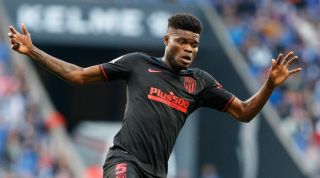 Arsenal and Manchester United could find themselves having to pay €100m for Thomas Partey if Atletico Madrid renew his contract.

Partey has become an essential figure in the heart of Diego Simeone's dogged Atletico side and the club are seeking to deter interest from abroad.

The Ghanaian played a crucial role in Atletico's victory over Liverpool in the Champions League round of 16.

The pair have been encouraged by the fact that Partey has a €50m release clause in his current contract which could be triggered this summer.

However, according to Goal, Atleti have entered negotiations with the 26-year-old regarding a new deal that would see his release clause doubled.

Considering the current market, Los Rojiblancos believe that €50m is no longer an appropriate amount for a player of Partey's stature.

The Atletico hierarchy are understood to be happy with Partey's attitude and thus remain confident that he will indeed agree to an improvement on his current contract.

It's reported that Partey will be offered a sizeable pay-rise to reflect his club's faith and appreciation - this to thought to be worth €4.5m per year.

The new contract will likely extend his current deal by two years, tying him to the club until 2025, so that Simeone can build around the deep midfielder.

Meanwhile, Arsenal are desperate to add midfield steel after Torreira's ankle fracture he sustained against Portsmouth in the FA Cup.

It's understood that Matteo Guendouzi is not seen as a purely defensive player and following his disciplinary punishment, he's dropped down the pecking order.

Manchester United are also seeking a more defensive player to accompany Bruno Fernandes in the middle of the park, despite Scott McTominay's return from injury.