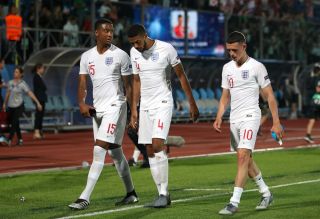 England Under-21 boss Aidy Boothroyd questioned his players’ concentration and admitted it would be “daft” to expect them to reach the Euro 2019 semi-finals after their defensive howlers.

Josip Brekalo’s late strike, his second of the game, forced the Young Lions to settle for a 3-3 draw with Croatia Under-21s in Serravalle as they ended their campaign without a win.

Croatia came from behind three times to cancel out Reiss Nelson’s penalty opener and goals from James Maddison and Jonjoe Kenny.

It was the Under-21s’ worst tournament performance since 2013 having lost to France and Romania, meaning they had already been knocked out before Monday’s final game in San Marino.

They conceded nine times in three games – seven goals coming in the final 14 minutes of matches – to finish third in Group C having only shipped four in 10 unbeaten qualifying games.

“When you give away goals like we have, if you are expecting anything but draws and losses then you are daft,” said Boothroyd, with Lloyd Kelly gifting the ball to Croatia for their second goal.

“The bottom line is last time (Euro 2017) we won the group with seven points, this time we might have played a nicer brand of football but we haven’t done what we wanted to do.

“We’ve been solid in qualifying. There is obviously a concentration issue but it’s been different players who have been doing it, not just one guy over and over again.

“Different individuals in different games have made poor decisions. At this level you get punished for them.

“We fight back and get ourselves back in it but end up throwing it away. When we go through it all there will be plenty to learn from this tournament.

“The main thing is that you stay in the game mentally, you score a goal and instead of relaxing you need to treble your efforts. That is all over the pitch.

“When you look at the calibre of players who are making the mistakes it doesn’t make sense. There will be reasons and we will get to the bottom of them with a new team next time around.”

Nelson opened the scoring from the spot after he was clipped by Branimir Kalaica but Boothroyd admitted the Arsenal forward was not designated to take it.

“No, he wasn’t which was a bit strange,” he said. “Tammy (Abraham) takes our penalties, he was put on the wall to do that. Maybe he is becoming benevolent. It’s very unusual for a centre forward to give the ball away. I don’t know. I haven’t got to the bottom of it.”

Brekalo found the top corner to level from 15 yards before the break but Maddison restored England’s lead three minutes after the restart.

Nikola Vlasic curled in after Kelly’s loose pass shortly after, only for Kenny’s 25-yard strike in the 70th minute to put England 3-2 up.

Yet Brekalo rolled in with eight minutes left to send the Young Lions home winless.

Boothroyd added: “We’ve got a debrief on Friday, one as a coaching staff and then, if there’s an opportunity before we go away, hopefully Gareth (Southgate) and I will get a bit of time together to discuss their learnings and ours.

“There’s plenty to talk about.”