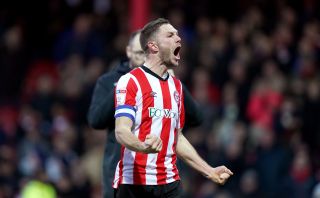 Brentford defender Henrik Dalsgaard believes Said Benrahma is among the best forwards in the Sky Bet Championship ahead of the play-off showdown against Fulham.

The prolific front three of Benrahma, Ollie Watkins and Bryan Mbeumo – who have scored 59 league goals between them this term – will be looking to add to their tallies in Tuesday’s clash at Wembley.

The Bees also boast the second-best defence in the division, and arguably one of the best goalkeepers in David Raya, and Dalsgaard believes the two are connected.

“Of course, it sounds like a cliche, but defending starts from Ollie (Watkins),” the Brentford defender said.

“He’s been so important for us, his work rate and his pressing style has been the key for us to make it hard for the opposition.

“It’s so much easier for me to look good when the pressure is right because I just have to read the situation, and yes we attack as a unit and we defend as a unit.”

When asked whether Benrahma was the best player in the division, the right-back replied: “He is definitely up there.

“I think it’s hard to say who is the best player, attacking-wise. If he is not the best then he is definitely top three.”

Brentford had to show their spirit recently after back-to-back defeats against Stoke and Barnsley in the last week of the season ended their chances of automatic promotion.

They battled back against Swansea in the play-off semi-final, overturning a first-leg deficit to triumph 3-2 on aggregate.

Pontus Jansson praised Mbuemo for his speech before the Swansea game, and Dalsgaard echoed his captain’s sentiments.

“I think it just shows how much of a family we are, that even though Bryan is young and his English is not the best, he is not afraid to stand up in front of the group and speak from the heart,” Dalsgaard said.

“So I think that’s what we’re about. We’re a family and we’re ready to fight for each other and if Bryan has something to say then we all listen to him and I think that’s important for us.”