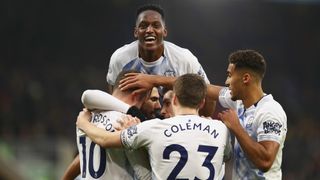 Lucas Digne scored twice as Everton responded to their Tottenham humiliation with a 5-1 away hammering of Premier League strugglers Burnley on Boxing Day.

Thumped 6-2 at Goodison Park on Sunday, the pressure was on the Merseysiders to end a five-match winless streak and they all-but achieved the task in the space of 22 minutes at Turf Moor.

Digne's free-kick - his second in four matches - and a Gylfi Sigurdsson penalty added to Yerry Mina's second-minute opener, before Ben Gibson marked his Premier League debut for Burnley with a goal.

But the Clarets, now two points behind fourth-bottom Cardiff City, never looked like avoiding an eighth loss in 10 matches, which was confirmed through Digne's exquisite second in the 71st minute and a tidy a late Richarlison finish.

Toffees boss Silva urged his players to "show character" following their meek surrender to Spurs and they delivered in a devastating start.

A moment of individual brilliance from December 26, 2018

Ben Mee's handball from a set-piece then enabled Sigurdsson to coolly extend the margin from the spot, although the Clarets were given a glimmer of hope when Gibson turned in James Tarkowski's blocked header eight minutes before the break.

England international Tarkowski squandered a glorious chance to further reduce the deficit soon after the restart, slicing a close-range half-volley over the crossbar.

The miss was compounded 19 minutes from the end as France defender Digne fired a left-footed drive into the bottom-right corner to ensure Everton serenely ascended back into the top half, with substitute Richarlison poking home a fifth right at the end after Sigurdsson played him in.

What does it mean? Dyche must fix defence

An adjustment in personnel from the 3-1 loss at Arsenal - Gibson coming in for Kevin Long - failed to remedy a Burnley defence that has now conceded more goals than the 39 they gave up in the entirety of last season.

They were unacceptably charitable in the first half and Dyche will know the issues need urgent fixing if they are to escape the drop zone.

Digne exhibited his goal-scoring prowess with a last-gasp equaliser at home to Watford earlier this month and was again influential going forward.

His two goals were both efforts of which his more naturally attacking team-mates would be proud.

Mee all at sea

While his team-mates hardly covered themselves in glory, but captain Mee's poor performance was the most destructive of Burnley's defensive implosion.

The experienced centre-back failed to pick up Mina for Everton's opener and gifted away the third by needlessly raising his arm.

Everton can look towards Saturday's trip to Brighton and Hove Albion with confidence, while Dyche will demand better from Burnley when they host West Ham the following day.