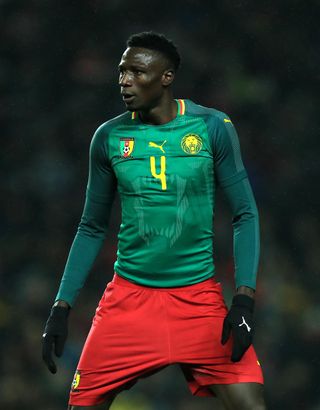 Cameroon launched the defence of their Africa Cup of Nations title with a routine 2-0 Group F victory over Guinea-Bissau.

Yaya Banana and Stephane Bahoken were on target for the Indomitable Lions at the Ismailia Stadium in Egypt.

Christian Bassogog should have put Clarence Seedorf’s Cameroon ahead just past the half-hour mark when Karl Toko Ekambi burst down the left and his cutback found Bassogog but he shanked his effort horribly over with goalkeeper Jonas Mendes out of position having attempted to close down Ekambi.

Guinea-Bissau offered little going forward with their best opportunities falling to Judilson Gomes and Juary Soares, who both fired over.

Banana opened the scoring after 66 minutes when he got on the end of a corner from Ekambi to head low past Mendes into the net.

It was 2-0 just three minutes later when a defensive mix-up in the Guniea-Bissau box saw an attempted clearance hit Sory Mane and the ball then dropped for Bahoken to calmly slot home.