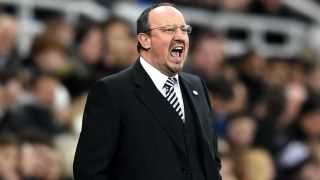 Newcastle United failed to climb back to the top of the Championship as they were beaten 2-1 by Sheffield Wednesday at Hillsborough.

A pair of second-half headers was enough for the home side to take all three points and climb back into the play-off places, while it allowed Brighton to stay at the summit.

There was also more disappointment for Huddersfield Town, an emphatic win for Norwich City over Reading and an important victory for Leeds United.

At the foot of the table, Wigan gave themselves hope, but Bristol City saw off Wolves to strike a blow against the bottom three.

It's over at Hillsborough!! What a victory for Wednesday... Three massive points! April 8, 2017

Newcastle missed out on the chance to retake top spot in the table.

Second-half headers from Tom Lees and Steven Fletcher were enough for the Owls despite Jonjo Shelvey's late strike making for a nervy finish in south Yorkshire.

Huddersfield look unlikely to capitalise on the slip from Rafael Benitez's men, though, having earlier lost 2-0 away to Nottingham Forest to stay 10 points outside the automatic promotion places, although they have a game in hand.

Norwich's hopes of a play-off place are still alive following a remarkable 7-1 destruction of Reading at Carrow Road.

The Canaries scored six times in the first half, with Wes Hoolahan and Alex Pritchard each netting a double, before Cameron Jerome added a seventh in the dying minutes. It is the first time they have scored as many in a league match since December 1955.

Aston Villa dropped below them to 11th with a 1-1 draw at Burton Albion, while Brentford's lingering top-six hopes were effectively dashed with a 2-1 defeat to Cardiff City.

Leeds stay fifth thanks to a 3-0 win over Preston North End, while Tom Ince struck an injury-time winner for Derby County as Gary Rowett celebrated three points on his return to Birmingham City.

Wigan's dramatic 3-2 win over already-relegated Rotherham United was tinged with disappointment as results elsewhere went against them.

Nick Powell smashed in a free-kick in the seventh minute of second-half stoppage time to seal victory for the Latics, but they remain seven points adrift of safety with only five matches left to play.

That was due to Bristol City's impressive 3-1 win over Wolves, with Chelsea loanee Tammy Abraham scoring twice to take his tally to 21 in the league this season as the visitors saw their five-game winning run come to an end.

City are now four points clear of the bottom three, with Blackburn Rovers succumbing to goals in the first 10 minutes from Marc Roberts and Marley Watkins as they lost 2-0 to Barnsley at Ewood Park.

Rotherham remain the only certainties for relegation and their replacements for next season have been decided. Sheffield United came from behind to win 2-1 at Northampton Town and secure promotion back to the Championship after a six-year absence.