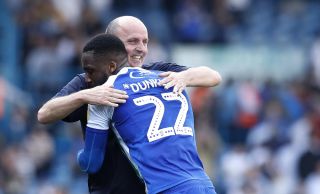 Paul Cook could not hide his delight – and relief – at seeing his Wigan side secure their Sky Bet Championship status with two games to spare thanks to a 2-0 victory over Preston at the DW Stadium.

Goals in either half from Leon Clarke and Lee Evans were enough to sink Preston, who played for 56 minutes with 10 men after Ryan Ledson was sent off for a high challenge on Wigan’s Kal Naismith.

Coupled with Rotherham’s 3-1 home defeat to Birmingham, it was enough to see Wigan – last year’s League One champions – to confirm their second-tier status for another campaign.

And after a worrying slide down the table in recent months, Cook was just happy to achieve the club’s solitary target at the beginning of the season.

“When you start off a season like we did, so strong and playing so well, we all thought staying up might be a formality.

“But then you get into the winter, injuries kick in to key players, and it’s a really tough time for the club.

“In the lowest moments we all thought about possibly getting relegated.

“But football is a long, long season, and you have to stay the pace.

“League tables don’t tell lies, everyone finishes where they deserve to finish, and we’re delighted to be staying up.

“I’m so pleased for the players and the staff, because those are the ones who’ve had to pick themselves up from the lowest moments.

“I thought we responded well at the right time, and I’m sure the Wigan fans are proud of their side tonight.”

Opposite number Alex Neil bemoaned the sending-off of Ledson that hampered their attempts to complete a double over a Wigan side who lost 4-0 at Deepdale last October.

As it happened, North End probably played some of their best football following Ledson’s departure.

But they were not able to make Wigan goalkeeper Christian Walton pull off any meaningful saves.

“Ryan makes a rash decision, he’s sent off, and it’s made it too difficult for us,” Neil said.

“And that’s happened far too often this season.

“If we’re going to challenge in the top six…that’s six times I’ve had to work with 10 men.

“We’re contributing to our own downfall too many times.

“I thought we actually started quite well, and in the first 10 minutes we were quite threatening.

“They get their goal, from a mistake, it’s probably the first ball they’ve put in our box, it’s landed straight at their feet.

“From that point, we didn’t move the ball well enough, we laboured too much on it, and ended up giving it away.

“I thought there were a few under-par in that first half, which was disappointing.

“I made my feelings known at half-time, I didn’t think we played with much purpose.”