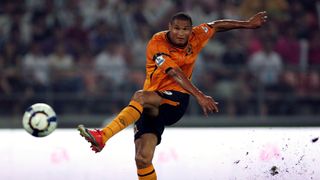 Pierre-Emerick Aubameyang's father has rejected the opportunity to take on a joint-coaching role for Gabon's national side, with Daniel Cousin handed the job on an individual basis.

Gabon's Football Federation - Fegafoot - announced on Friday that it had reached an agreement with Pierre Francois Aubameyang and Cousin to take over.

However, Fegafoot were forced to issue an apology after Arsenal star Aubameyang took to social media to refute Gabon's claims, adding that his father was ill.

And Fegafoot have now confirmed that Cousin - who played 56 times for Gabon - will be the sole coach of the Panthers.

"As a former captain, being able to train this team is seeing a dream come true," Cousin said.

Cousin's first fixtures in charge will be a double header against South Sudan in qualifying for the 2019 Africa Cup of Nations.