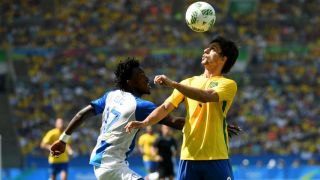 Reported Paris Saint-Germain target Rodrigo Caio has signed a new contract which keeps him tied to Sao Paulo until 2021.

The 23-year-old, who can play at centre-back or in central midfield, helped Brazil to Olympic gold on home soil in 2016 and has since been included in Tite's senior squad during World Cup qualifying.

His renewal at the Morumbi comes as a significant coup for Sao Paulo, with Rodrigo Caio attracting significant interest from such European sides as PSG, Atletico Madrid and Sevilla in the past year, while a reported €12.5 million switch to Valencia fell through in 2015.

Despite such links, Rodrigo Caio is adamant that continuing at Sao Paulo has always been his aim.

"It's a great joy to renew my bond with the club," he said in a statement. "My whole family is from Sao Paulo, and I'm happy to be appreciated by Sao Paulo.

"I hope to stay here longer and win titles to mark my name in the history of the club, because this is my main goal. I also owe a lot to the club for the support they've given me since I was 12 years old."