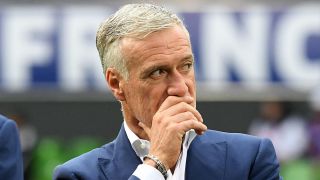 Didier Deschamps warned against rushing to judgement on the France players who debuted in a low-key 0-0 draw against Ivory Coast on Tuesday.

Coach Deschamps conceded the much-changed line-up was a hindrance to winning the game, but felt the experience would prove key to his squad's development.

"We had a tough game and it was a laborious second half," he told Canal + Sport following the match in Lens, which followed Friday's World Cup qualifying win over Sweden.

"When there are many changes, it does not help. We won the game that we had to win on Friday and there I was able to give playing time to young players.

"It seemed appropriate for the team. Do not judge too quickly the players tonight. The requirements at this level are very high, but I do not often get the chance to do that.

"We have done very good things this year with the highlight being Euro 2016 – although the only loss we have is the one that hurts and prevents us to have a title.

"The team has improved a lot. We must build on it. I'll make sure to give the young players a taste of the high level in the future."