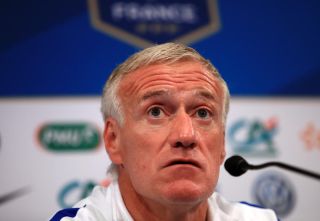 France head coach Didier Deschamps praised his players for the way they bounced back from defeat by Turkey to get their Euro 2020 qualifying campaign back on track with a 4-0 win in Andorra.

Les Bleus were knocked off top spot in their group on Saturday after falling to a 2-0 defeat to Turkey, but a thumping win at Andorra’s national stadium and Turkey’s loss in Iceland saw Deschamps’ side return to the summit of Group H.

Kylian Mbappe set the ball rolling with an early opener before Wissam Ben Yedder, Florian Thauvin and Kurt Zouma all scored their first international goals to complete a straightforward win.

Deschamps also praised his team for coping with injuries as both Raphael Varana and Kingsley Coman were unavailable.

Deschamps told a press conference after the win in Andorra: “I had planned changes, with the injury of Raphael (Varane) and Kingsley (Coman) who could not hold his place either.

“The group reacted well. We did a bad match last Saturday (against Turkey), not up to the level we usually have. The players showed a lot of application.

“I made a lot of changes tonight. We started well, we put a lot of quality. I think the players took pleasure, despite this unusual pitch for them.”

He said: “The victory of Les Blues is a good performance, because the last match was not good.

“Now it’s over, we did the job today. We must stay on this mentality. Matches like this are always the most difficult, mentally, you have to be prepared because you play against weaker players – while respecting them. You have to stay professional and play as a great team.”