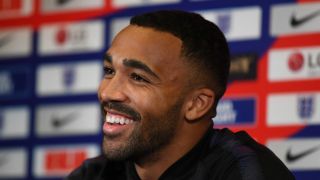 Callum Wilson would not compare himself to England captain Harry Kane but feels he can nail down a regular place in the Three Lions squad.

Bournemouth striker Wilson is in the England team for the first time, having hit six Premier League goals so far this season - the same number as Kane - while contributing four assists.

Jamie Vardy's retirement from international football has opened a spot up front, while Arsenal's Danny Welbeck faces an extended lay-off after breaking his ankle.

And Wilson, 26, believes he has what it takes to become a firm fixture in the England set-up for many years to come.

"I feel like I don't want to come here just to make the numbers," Wilson said in quotes reported by The Telegraph.

"I want to impress the manager [Gareth Southgate] and be here for a number of years, not just for this season.

"I think I'm an out-and-out number nine. Obviously, I wouldn't class myself as similar to Harry Kane, we're different players.

"I tend to just play down the middle. I feel like I can score goals so I'm just hoping I can stay fit, in form and get some opportunities."

Wilson has worked his way up through the Football League to earn the chance to represent his country, recovering from two serious knee injuries during his time at Bournemouth.

"Even when I was at Coventry [City], playing in the Conference [National League], I always said I'd play at Wembley for England," Wilson added.

"I've never played there, the only time I've been to Wembley was to watch Coventry in the EFL Trophy final [in 2016-17] when I was injured. I've always been injured when Bournemouth have played Spurs there as well.

"It would be a dream come true. There's no guarantees I will get on but I've still got probably 15-20 people from my family and friends coming to the game to watch, and it just shows for me what they want for me and what I want for myself."