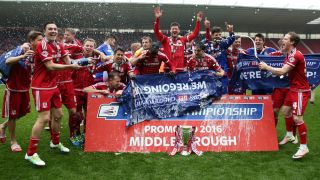 Middlesbrough ended their seven-year absence from the Premier League by holding promotion rivals Brighton and Hove Albion to a 1-1 draw at the Riverside.

Brighton headed to Teesside needing a win to pip the hosts to the second automatic promotion spot, but fell behind to a first-half strike from Cristhian Stuani.

And although Dale Stephens did give Chris Hughton's the visitors hope by heading them level on 55 minutes, the midfielder saw red moments later for a wild challenge on Gaston Ramirez.

Middlesbrough duly hung on to secure their place in the top flight, while Brighton were left facing the prospect of a play-off semi-final against Sheffield Wednesday.

Sam Vokes, Andre Gray and George Boyd all found the net as Sean Dyche's men completed an unbeaten second half of the season.

Hull City warmed up for the play-offs with a 5-1 hammering of Rotherham United while their upcoming opponents Derby County were beaten 1-0 at home by Ipswich Town.

In League Two, there was last-gasp delight for Bristol Rovers who claimed the third automatic promotion place courtesy of a 2-1 comeback victory over relegated Dagenham and Redbridge.

Accrington Stanley had occupied third spot at the start of play, but were held to a 0-0 home draw by Stevenage and Rovers dramatically pipped them at the last thanks to Lee Brown's 92nd-minute winner.

Accrington will now meet AFC Wimbledon in the play-offs, while Plymouth Argyle will take on Portsmouth.