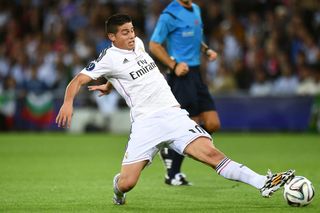 Everton are leading the race for Real Madrid’s James Rodriguez, Spain’s El Desmarque reports. The Colombian midfielder has become surplus to requirements at Real, and has attracted interest from clubs including Arsenal, Roma and Inter Milan. But the Toffees are said to be in pole position to land him, with new manager Carlo Ancelotti a big fan of the 28-year-old.

Adam Lallana will be on his way out of Liverpool at the end of the season, The Daily Telegraph says. The 31-year-old has shown his class when given opportunities this term, but with competition for first team places so intense at Liverpool, he has often struggled for a place in the starting side. Manager Jurgen Klopp says he would love to keep the attacking midfielder but understands why he would want to leave.

Manchester United are set to offload Marcos Rojo in the January transfer window, the Manchester Evening News reports. The 29-year-old defender has not played for United for almost two months due to injury, and has spent time in Argentina recently mulling his future. Rojo came close to leaving for Everton last August but the proposed deal fell through.

Tammy Abraham‘s contract renewal talks with Chelsea have stalled, according to Goal.com. The 22-year-old forward is reportedly holding out for the same wage – £180,000 a week – as 19-year-old winger Callum Hudson-Odoi. Abraham’s current deal still has two-and-a-half years to run but several top clubs in Europe would be willing to step in given his recent impressive form.

Manchester United are keen to sign Dominic Calvert-Lewin from Everton next summer, The Sun reports. United’s interest in the striker has intensified after they missed out on the most keenly sought signing in Europe, Erling Haaland committed to Borussia Dortmund. It is expected Calvert-Lewin, 22, would cost around £50 million.

Pierre-Emerick Aubameyang: Is likely to leave Arsenal at the end of the season, with Mikel Arteta realising he will face a struggle to keep him.

Danny Drinkwater: The midfielder, currently on loan from Chelsea to Burnley, could be going to Aston Villa on loan in January.

Max Clark: The former England under-17 left-back, now at Vitesse Arnhem, has caught the eye of Liverpool.