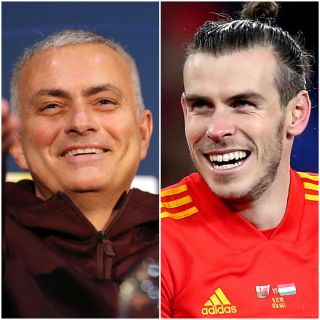 Former Tottenham star Gareth Bale will be one of the first targets for Jose Mourinho as he takes over at Spurs, Spain’s AS reports. The publication says the Portuguese manager wanted to sign the Wales international from Real Madrid during his time in charge of Manchester United. However, rival Spanish outlet Marca reports Real have ruled out a January exit. Bale has come in for criticism since celebrating with a flag bearing the words “Wales. Golf. Madrid. In that order” after his country qualified for Euro 2020.

Mauricio Pochettino, the man being replaced by Mourinho, could end up at Barcelona or Bayern Munich as his next managerial post, according to The Sun. The paper says Ernesto Valverde is under pressure at Barca, while Bayern are currently under the stewardship of interim manager Hansi Flick.

Edin Dzeko could be on his way to Manchester United, according to ESPN, which reports Ole Gunnar Solskjaer might move for the Roma and former Manchester City striker in the January transfer window.

Arsenal have intensified their interest in Red Bull Salzburg forward Erling Haaland, according to Sport Bild. Manchester United are also still keen on signing the 19-year-old, the Daily Mail reports.

Olivier Giroud: May be reunited with his former Chelsea boss Antonio Conte at Inter Milan, according to The Sun.