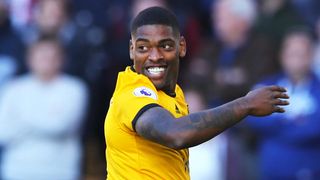 The Portugal international stepped up his return from a lengthy back injury by breaking the deadlock in a patient 2-0 win over Southampton.

Cavaleiro tucked home Raul Jimenez's pass just 94 seconds after stepping off the bench for his top-flight debut in English football.

"I think he played a good 55 minutes on Tuesday. Today he came on from the bench and helped the team," Nuno said after the match.

"This is what we want. When a player comes in, either in the starting XI or from the bench, he must do his task and help the team. He did well today.

Full-back Jonny chimed in eight minutes after the opener to put the match beyond Southampton.

Mark Hughes, whose team had been secure until Cavaleiro's introduction, was left to bemoan the late collapse.

"On too many occasions we've done okay in away games, but not got what we've deserved, and that was an example today," the Saints boss said.

"We've come here with good intentions and a positive attitude, and I feel if we'd have scored first we would have won the game. But goals change games.

"They got the second while we were trying to get back on level terms, and that can happen, but [we are] disappointed in the manner we conceded."