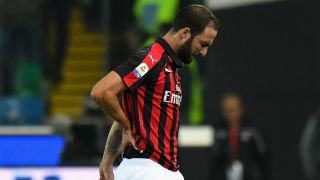 Gennaro Gattuso has dismissed talk of Gonzalo Higuain moving to Chelsea, while insisting AC Milan's problems are not the sole responsibility of the struggling forward.

Higuain joined Milan in a high-profile initial loan switch from Juventus in June but has so far failed to hit the levels of previous seasons, netting just five times in Serie A this term.

With Chelsea, coached by Higuain's former Napoli boss Maurizio Sarri, said to be on the lookout for a new front man in January, reports have emerged that the Blues might trade their own misfiring forward Alvaro Morata for the Argentina international.

But Gattuso knows nothing of such a deal and instead plans to build around Higuain, claiming the ex-Real Madrid man is suffering due to a lack of service.

"I do not know [about any potential swap]," he told a news conference ahead of facing Fiorentina. "We're keeping hold of Higuain and, in recent years, Chelsea have not bought players aged 30 or 31.

"Higuain is going through a difficult moment, like the whole team, but I treasure him a lot. I have no doubts about him. We have to put our players in a position to play well and express their full potential.

"Right now, we are struggling with our midfielders, who cover the pitch but are unable to supply quality balls forward. Our problem is not Higuain."

The coach added: "It is normal that, on a mental level, Higuain is not in a positive moment and is missing scoring goals. We have only discussed football, no contract talk, and our focus is to help him return to scoring form."

Milan are winless in three games in all competitions, going out of the Europa League to Olympiacos in that time, but they remain fourth in Serie A and Gattuso is positive ahead of the rest of the season.

Gattuso: "All I know is that we made some mistakes during this first half of the season but the most important thing is to stay calm, focused and concentrated on the next games ahead".December 21, 2018

"The first day of the season, the club asked me to get to the Champions League," he said. "We are fourth, but it is as if we are eighth or ninth. We have to wake up.

"The Olympiacos game was a blow, but we have to continue to work seriously. If [the media] think we are stronger than what we are showing, it is talk that does not concern me.

"We started the season slowly, not winning games that we had to win, but we also benefited from the results of our rivals."