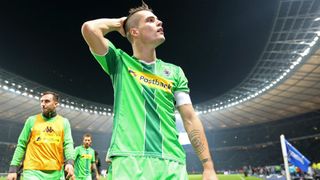 Borussia Monchengladbach have confirmed a transfer bid has been made for Granit Xhaka, though no agreement has yet been reached with the interested club.

The Switzerland international has been heavily linked with a move to Arsenal after a hugely impressive season at the heart of Andre Schubert's side.

The Bundesliga club have stated an offer has been lodged for the 23-year-old but warned a deal is far from being completed.

"Sporting director Max Eberl has confirmed that there has been a specific offer for the Swiss midfielder," a statement posted on their official website said.

"An agreement with the interested club is still pending, however."

Xhaka told Bild this week he expects his future to be resolved before the European Championship begins in France on June 10.

"There will be regular talks now and a final decision will be made before Euro 2016," he said.

"I started my Borussia career in the DFB-Pokal against Darmstadt. I then had four wonderful years here. And now I played what could have been my last game for Gladbach against Darmstadt, too.

"The circle has been closed."