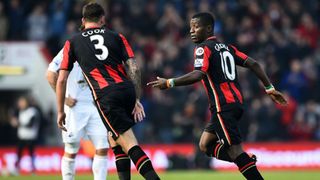 Gradel suffered a serious knee injury at the beginning of the season and only made his return in the goalless draw at Watford on February 27.

The former Leeds United man scored the opening goal against Swansea at the Vitality Stadium and went on to set up Josh King for Bournemouth's second, with Steve Cook ultimately heading in the winner late on.

And Howe spoke of his pride in the attacker, with the goal completing his comeback from a "dark time" and helping Bournemouth go 13 points clear of the relegation zone.

Speaking to BBC Solent Sport, Howe said: "Max is a goalscorer. You don't score the amount he managed in the top league in France last year if you're not a creative player and have the ability to get goals and his finish was an outstanding one and he got an assist.

"I'm really pleased for him individually as he has had a dark time this season. It's great to see him come through that and see him on the pitch."

Howe also spoke highly of King, who scored for the second match in a row, with the manager now expecting the Norwegian to add more goals to his otherwise consistent performances.

"I think it is all linked to self-belief and confidence," he added. "Josh has all the attributes; he's quick, he's strong, he's got a good touch and knows where the goal is.

"He was producing some excellent performances without the goals for a long time but now I'm really pleased because every striker needs the goals to back that up with and he needs to find the net regularly now."