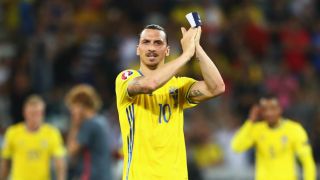 Zlatan Ibrahimovic insisted he was very happy to see Sweden into the World Cup knockout stage, saying the nation were taking over just as he once did.

Ibrahimovic, 36, retired from international football after Euro 2016, having scored a record 62 goals in 116 appearances for his country.

There were suggestions the striker could return for the World Cup, but he was overlooked, and Sweden have shown few signs of missing the superstar as they topped Group F to reach the last 16.

Ibrahimovic said he was delighted to see his nation performing so well on the world stage.

"I said before the World Cup they'll go far and they'll probably win it," the LA Galaxy striker said on Thursday.

"I'm very happy, proud to be Swedish, driving around with a Swedish flag, so, we hear them.

Sweden claimed wins over South Korea and Mexico while losing to Germany in the group stage, and Janne Andersson's men face Switzerland in the last 16 on Tuesday.

Ibrahimovic said Sweden had already shown they would be tough opponents for any team.

"Whoever plays against Sweden will have a hard time for sure and I think everybody knows it," he said.

"They've shown it, they know it and they will continue. It's a difficult game, it's a European clash, so let's see.

"They played against two non-European [teams] and they beat both of them and they lost against Germany, who are European, but I think it doesn't matter here, because here it's like win or lose.

"But they'll do good. We all support them."