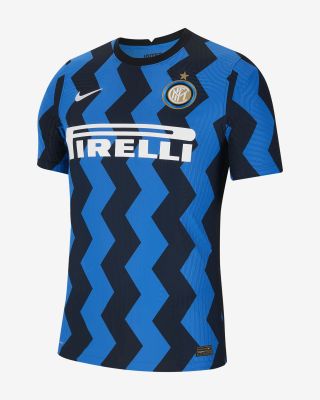 Inter Milan have revealed their new kit ahead of the 2020/21 season – and it has the makings of a classic. The Nerazzurri's traditional navy and black stripes have been given a modern twist, with a zig-zag design unlike anything they've worn before.

The club edged in a new direction with their 2019/20 kit, which featured slanting stripes around the sponsor only. This year they've gone for something completely different, however.

HOW TO BUY IT Get your own Inter Milan Vapor Match Home Shirt £99.95 here

One thing does remain the same, though. Pirelli, the tyre manufacturers which have adorned the team's shirts since the 1995/96 campaign, will enter their 25th straight season as club sponsor.

Kit makers Nike have produced a typically state of the art design, made from 100%-recycled polyester fabric. Then stretchy material moves with your body, while the breathable fabric means sweat and water dry quickly for peak performance. Long gone are the days when wearing a football shirt in the rain felt akin to playing 90 minutes with Xherdan Shaqiri on your back.

Football kits have certainly been enjoying a golden era of late, with more and more teams opting for fresh designs and patterns and Inter's latest is no different. It might not be Nigeria 2018 levels of wow, but it's certainly bold.