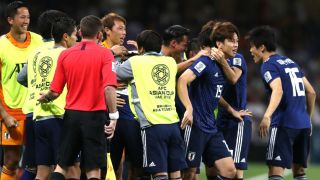 Yuya Osako's brace helped Japan beat pre-tournament favourites Iran 3-0 and book a place in the 2019 Asian Cup final, as they go for an unprecedented fifth title.

Monday's semi-final was billed as being a contest between the competition's two best teams and, although Carlos Queiroz's men had their chances, refereeing decisions did not go their way and Japan ultimately cruised.

Neither side was able to stamp much authority on a cagey first half and things looked much the same after the break until Japan broke the deadlock, leaving Iran angry as they felt a dive went unpunished in the build-up to Osako's first.

Japan were then given a penalty that, even after VAR consultation, was allowed to stand and Osako buried the kick in convincing fashion, before Genki Haraguchi finished Iran off late on.

A tightly contested first half of few chances saw Japan go close first, but Ritsu Doan sent a feeble shot wide of the bottom-right corner from 16 yards in the 19th minute following a well-worked move.

Iran sprang into life soon after – Sardar Azmoun playing a brilliant one-two with Vahid Amiri, before slipping the ball through Takehiro Tomiyasu's legs and forcing a fine save from Shuichi Gonda.

Japan controversially went ahead early in the second half, however.

Iran felt Takumi Minamino had dived when the ball was played left, with Queiroz's players swiftly surrounding the referee, but play was allowed to continue and the subsequent cross was headed in by Osako.

There was further controversy just past the hour, as Morteza Pouraliganji was penalised after the ball struck his hand when sliding in to block a cross, and Osako converted the resulting spot-kick following a VAR delay.

Haraguchi ended Iran's slim hopes of a comeback in the first minute of stoppage time, emphatically finishing after being fed into the box by Minamino.

What does it mean? More questions to be asked of VAR

It is fair to say VAR is going to be the focus in the post-match reaction, as Iran were furious an apparent dive by Minamino was allowed to go unpunished in the build-up to the first Japan goal, while there was certainly a reason for frustration with the penalty as well, with Pouraliganji perhaps unlucky to be penalised.

While Iran and others can have reservations about the validity of Japan's first two goals, Osako still had to make sure he was decisive. Aside from being generally effective leading the line, he also made the difference when he needed to.

Going into the tournament, Alireza Jahanbakhsh was tipped as being a potential star of the Asian Cup. However, having not made much of an impression in the Premier League for Brighton and Hove Albion yet this season, he was similarly disappointing in this outing, giving Azmoun little support.

Japan will contest Friday's final against the winner between Qatar and hosts United Arab Emirates, while Iran head home.