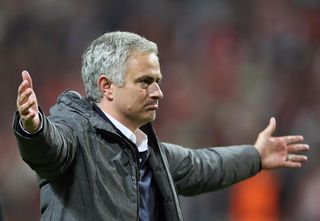 Jose Mourinho has vowed to lead Tottenham up the Premier League table after becoming their new head coach.

The 56-year-old has been named as Mauricio Pochettino’s successor, signing a three-and-a-half-year deal at the north London club.

He met his new squad following his hasty appointment, which was announced less than 12 hours after Pochettino was fired, on Wednesday and then took training ahead of his first game in charge at West Ham on Saturday.

The Portuguese, who has been out of work since losing his job at Manchester United last December, inherits a squad that are languishing in the bottom half of the Premier League, having taken 14 points from their 12 games.

They are 11 points off the top four and while Mourinho stopped short of saying Spurs could bridge that gap, he promised they would be in a better position once he gets going.

“In relation to the Premier League I think we know where we are and we know that we don’t belong there,” he told Spurs TV.

“At the end of the season we will see where we are but I know that we are going to be in a different position than we are now.

“I look forward to the challenge and the responsibility to bring happiness to everyone that loves the club.”

All three worked under Mourinho at Old Trafford.

Despite his intrinsic links to Chelsea, Mourinho has always spoken fondly of Tottenham, touting them as a potential title winner at the start of the season, while he has been in attendance at several games this season.

He was always glowing in his praise of Pochettino and has reiterated his delight at taking on a squad that he believes is full of quality.

“It is a privilege when a manager goes to a club and feels that happiness in relation to the squad that he’s going to have,” he added.

“These are words that I’ve told and I’ve repeated in the last three, four, five years even as an opponent.

“I always told about the magnificent work the club was doing. I really like this squad.”

Mourinho arrives in north London needing to repair his reputation after a toxic final few months of his time at Old Trafford.

The Portuguese was often pictured looking dishevelled, was often bad tempered in press conferences and allowed a fall-out with Paul Pogba to affect the club.

He looks rejuvenated – no doubt thrilled at the prospect of being able to work in London again – and he insists he will show passion for the role.

“I couldn’t be happier and if I was not as happy as I am, I would not be here,” he added.

“What can I promise? Passion – for my job but also passion for my club.”

On paper, Mourinho’s appointment at Spurs appears a mismatch as they are traditionally a club that plays an attacking style of football and promotes young players.

It seems unthinkable for him to have taken the job without some sort of assurances from chairman Daniel Levy that there will be money to spend – starting in the January transfer window – and he has also vowed to use players from the academy.

“The problem is sometimes you get into clubs where the work that is below you is not good enough to produce these players.

“I look to our history and you see that the academy is always giving players to the first team and I look forward to working with that profile.”

Despite his troubles in the latter stages of his tenure at Old Trafford, Mourinho remains one of the most sought-after managers in the game.

His success at delivering trophies is not in question, having won three Premier League titles, two Champions Leagues and a host of domestic cups, and that was a clear attraction for Levy.

Levy previously tried appointing Mourinho in 2007 when he left Chelsea for the first time and has admired him since.

Levy said: “In Jose we have one of the most successful managers in football.

“He has a wealth of experience, can inspire teams and is a great tactician. He has won honours at every club he has coached. We believe he will bring energy and belief to the dressing room.”

Pochettino was dismissed after five-and-a-half years in charge, less than six months after he took Spurs to the Champions League final, with the club lying 14th in the Premier League table after the opening 12 matches.

With Manchester United and Real Madrid previously keen and now Bayern Munich looking for a new manager, the Argentinian will be out of work for only as long as he chooses.

Mourinho will be presented to the media at 2pm on Thursday.