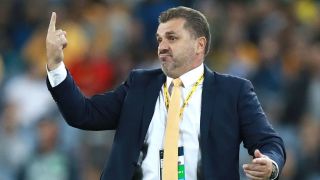 Socceroos head coach Ange Postecoglou hit out at Honduras for disrespectful comments made before Australia's goalless draw in the first leg of their World Cup inter-confederation play-off.

Australia produced a dominant display but the visitors were unable to make the breakthrough against CONCACAF's Honduras in San Pedro Sula on Friday.

And Postecoglou – who watched striker Tomi Juric waste two golden opportunities – vented his frustration with the host nation during his post-match news conference.

"Maybe you thought we were going to be easy," Postecoglou told reporters.

"I saw in the newspaper you said it was 11 kangaroos out there, but kangaroos can play football, eh?

"People made comments about Honduras – they were wrong and we apologise for that but there were some comments made in Honduras about our team [too].

"All I heard was we have a simple game plan and no stars – that was our motivation."

The equation is simple. Win on Wednesday night and we will go to the . November 10, 2017

Australia were prepared for a hostile atmosphere at Estadio Olimpico Metropolitano but Postecoglou felt the Socceroos silenced the local supporters with their performance on a sub-par pitch.

"I said to the players I think we silenced the crowd, because of the way we played," said Postecoglou, whose future has dominated headlines amid speculation he will vacate his position even if Australia qualify for the World Cup.

"The players handled it really well. The pitch was a challenge... I felt for the most part we kept the crowd really quiet."

Postecoglou, who welcomed back captain and Aston Villa midfielder Mile Jedinak, continued: "I thought it was a great performance. I thought we were good enough in our play to get one or two goals.

"We wanted a strong performance – that's what we got ... now our conditions, fresh players. I think we're in [good] shape."