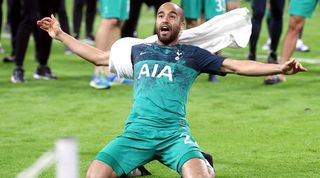 The Brazilian scored an astonishing treble, including a 96th-minute winner, to secure a 3-2 second-leg win for Spurs in the semi-final and send them through on away goals.

Lucas believes it was a turning point in his relationship with the club’s fans, and explained that he has noticed differences in his day-to-day activities ever since.

“At the time we had no comprehension of what we did,” he told ESPN Brasil, as reported by Sport Witness.

“In the street, fans always come to talk about that game.

“Today I see a lot more fans with my shirt, and it also greatly increased my followers on social media!

“It's very satisfying to know that you're loved at the club where you play.”

Spurs face Arsenal in the north London derby this weekend and Lucas has already set his mind on finding the net against his club’s biggest rivals.

“I know the importance of this game, how much the fans expect for it, that they want to win, how seriously they take it,” he said.

“It’s an objective. Of course, winning the derby is more important. But being able to score in a game like this we know is more special.

“It’s very important to score in every game, but in a derby against opponents like this is even more special.”