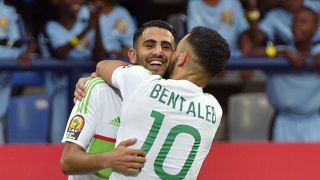 Riyad Mahrez scored twice in Algeria's 4-1 victory over Togo on Sunday to seal his country's place at the 2019 Africa Cup of Nations.

Gambia's 3-1 win over Benin on Saturday meant victory for Algeria in Lome would guarantee them a top-two place in Group D, and Mahrez ensured they achieved that.

The Manchester City winger opened the scoring in the 13th minuteÂ with a superb volleyed lob before doubling his tally on the half-hour with a rasping drive - thatÂ coming soonÂ after Youcef Attal had made it 2-0.

Togo were able to pull a goal back but Algeria sealed the win they needed thanks to Baghdad Bounedjah's stoppage-time strike andÂ the Desert Foxes will hopeÂ to end a 29-year wait for AFCON glory when the finalsÂ get under way next June.

They will be joined in Cameroon by the Ivory Coast after they secured a 1-1 with already-qualified Guinea, Fulham midfielder Jean Michael Seri scoring the decisive goal that sees the Elephants progress from Group H.