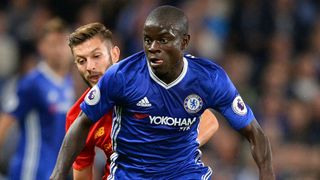 Claude Makelele hopes N'Golo Kante can become the best holding player in the world but claimed the Chelsea midfielder has work to do if he is to perfect the position.

Former France international Makelele was widely regarded as one of the best defensive midfielders in the world at the peak of his career, shielding the backline and distributing the ball to more gifted attacking team-mates with understated brilliance at Real Madrid and Chelsea.

The 43-year-old, who began his career at Nantes and also played for Marseille and Celta Vigo before retiring in 2011 after a spell with Paris Saint-Germain, was asked by UEFA's website which active player he considers to be the best in his old role.

"It is a position where it is difficult to play," he said.

"You must be a leader. You must work with your team-mates in midfield. I like N'Golo Kante, but is he better than me at this? I do not know. He still needs time to fully learn the job, to learn about football."

The unheralded Kante burst onto the scene at Leicester City last season, powering Claudio Ranieri's team to a shock Premier League title triumph after being plucked from the relative obscurity of Caen.

His efforts in the Foxes' unexpected triumph earned him a place in the France squad for Euro 2016 and a big-money move to Chelsea, where the 25-year-old is already demonstrating his worth to Antonio Conte's side.

"He is a young player I really like, and I hope he will be better than I was," former Blues favourite Makelele said.