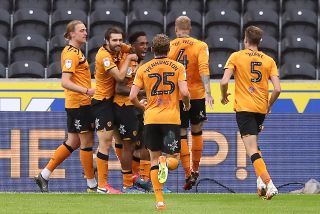 Outside hopes of the Jarrod Bowen-inspired Tigers reaching the play-offs have swiftly become an almighty fight against the drop, with Grant McCann’s embattled side enduring a 13-match winless streak.

That run was set to extend as Hull’s hopes of beating the drop faded on Thursday evening, only for Wilks to fire home in stoppage time and secure a 2-1 win that saw his side leapfrog Middlesbrough in the standings.

It was an extraordinary conclusion to a match that had begun in similarly striking circumstances, with Britt Assombalonga’s fourth-minute penalty cancelled out by a superb Herbie Kane free-kick four minutes later.

But the on-loan Liverpool man and Callum Elder would be forced off in a first half that Boro controlled, with Warnock’s men going on to dominate the second period.

Yet against the run of play, Hull eked out victory as Jordy de Wijs nodded into the path of Wilks to net on the day he made his loan move from Barnsley permanent.

Warnock will be wondering how his side failed to come away with a point when Boro could easily have taken all three at the KCOM Stadium, where they grabbed a fourth-minute lead.

Meek defensive play by Hull allowed Marvin Johnson to get away a shot that George Long parried into the path of Hayden Coulson, who was hauled back by De Wijs before he could prod home.

Referee Geoff Eltringham had no hesitation in pointing to the spot and Assombalonga fired home the penalty.

It was a gut punch but City hit back in style in the eighth minute.

Johnson was adjudged to have brought down Wilks on the edge of the box and Kane stepped up to the free-kick, curling home a lovely, right-footed shot into the top corner out of the reach of Boro goalkeeper Dejan Stojanovic.

Hull struggled to stamp their authority on proceedings after the leveller and Assombalonga would have immediately put Boro back ahead had he met Johnson’s cross with sufficient contact from six yards out.

Paddy McNair directed wide after racing through and Patrick Roberts was proving a handful as Warnock’s men continued to push, with Coulson fluffing his lines after a fine work down the right by Djed Spence.

Hull eventually settled but struggled to create anything moving forwards and were hit by two injuries before half-time, with Kane forced off and medics ensuring making sure Elder followed suit after being caught by McNair.

Spence became the third casualty of the day early into a second half that Hull started with teenager Keane Lewis-Potter, who was quick to try his luck when the ball fell his way.

Warnock turned to Marcus Tavernier in a bid to add extra threat and it nearly worked, with the substitute bending an effort just wide before seeing a goal ruled out for a foul in the build-up.

Tavernier was angered by that decision and Boro’s frustration turned to heartache in stoppage time as they failed to deal with a long ball into the box and Wilks struck home.