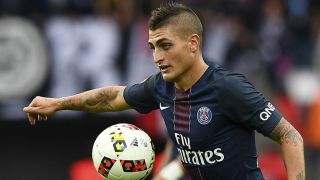 Verratti signed a five-year contract with Ligue 1 titleholders PSG in August but the Italy international continues to be linked with a move away from Paris.

Serie A champions Juventus have emerged as a possible destination but Marotta insisted the 24-year-old will not be moving to Turin.

"I'm very happy for him and our national team," Marotta told Mediaset Premium prior to Juve's 4-1 rout of Palermo on Friday.

"He's a great player who we like, even if I think it's utopian to think of him, because PSG are focusing on him and we don't have an opportunity."

Verratti played a key role in PSG's 4-0 rout of Barcelona in the first leg of Tuesday's Champions League last-16 tie.

He has played 17 Ligue 1 matches this season and six Champions League games.