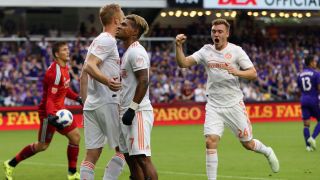 Atlanta United continued their impressive start to the MLS season, while New York City were held on Sunday.

First-half goals from Josef Martinez and Ezequiel Barco saw Atlanta to a 2-1 win over Orlando City for their eighth victory in 11 games.

Martinez opened the scoring from the penalty spot in the 10th minute for the Eastern Conference leaders.

Barco made it 2-0 just after the half-hour mark, finishing superbly after a cutback from the left from Greg Garza.

While Justin Meram pulled a goal back for Orlando in the second half, Atlanta saw out their victory to move four points clear at the top.

New York City are four points back after playing out a 2-2 draw against Los Angeles FC.

David Villa struck in the 13th minute for City, putting away a rebound after his penalty was saved.

A Sebastien Ibeagha own goal drew LA level and they took the lead in the 66th minute, Carlos Vela finishing from inside the area.

Ismael Tajouri-Shradi's smart finish from an angle earned a point for New York City in the 75th minute.