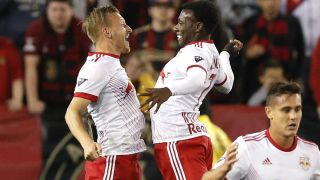 New York Red Bulls preserved their perfect start to the MLS season, while reigning champions, the Seattle Sounders equalised at the death.

The Red Bulls made it two wins from two games with a 1-0 victory at home to Colorado Rapids on Saturday.

After rallying to beat Atlanta United last week, the Red Bulls earned another three points thanks to Eric Miller's own goal on the stroke of half-time.

Rapids defender Miller directed a cross into his own net as Red Bulls goalkeeper Luis Robles celebrated his MLS record 142nd consecutive start with a win.

There was a grandstand finish in Montreal as the Sounders scored a last-gasp goal in a 2-2 draw at the Impact.

The Impact were up 2-0 with seven minutes remaining until the Sounders stunned the home crowd in Montreal.

First, Nicolas Lodeiro converted an 83rd-minute penalty and then substitute Will Bruin bundled the ball into the net in the fourth minute of stoppage time as the champions claimed their first point of the season.