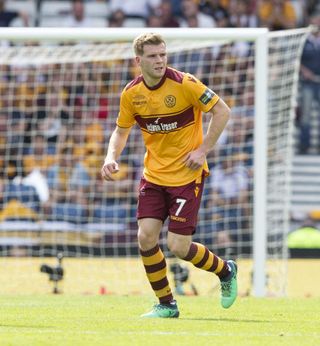 Major League Soccer agreed to adhere to the FIFA-recognised training compensation regulations earlier this year, but the categories of clubs have not been fixed.

MLS side Columbus are believed to be claiming they are two categories lower than Motherwell despite their wage bill dwarfing that of the Scottish club, meaning the fee owed for Cadden could be as low as £30,000.

To further complicate the situation, Cadden – who has been on Motherwell’s books since he was nine – is expected to be loaned to Oxford.

The Sky Bet League One club had also been in the hunt to sign the versatile player over the summer and Motherwell could have expected more than £300,000 if Cadden had gone straight there.

While Cadden’s ultimate destination is uncertain, Motherwell are keen to press their case with FIFA for suitable compensation from the Americans.

Lasley said: “That’s what the system is designed for, to compensate clubs for the hard work and development that it takes from a young age.

“You see the amount of young boys who have come into our team, that doesn’t just happen when they turn 18. A lot of hours and development have gone in to help the boys.

“So hopefully that situation can be resolved and we can be compensated accordingly. It’s vital to this club surviving and prospering.

“It takes a lot of hard work from a coaching sense and investing in these young lads. Ultimately they have got to take that nurturing and maximise it with their own attitude and determination but it’s a big effort and we put a big emphasis on it at this club.

“Stevie Hammell, who is now heading up the academy, is working every hour under the sun to try and maximise these kids from seven/eight years old all the way through and try to give them a pathway through to the first team.

“The compensation scheme helps to reimburse and compensate us for the investment. It is important it is adhered to and hopefully the situation can be resolved.”

Cadden’s departure was one of a number this summer with nine players coming in the other way.

Many of the new arrivals have hit the ground running as Motherwell netted seven goals without reply against Queen of the South and Morton in the Betfred Cup.

“It’s been encouraging,” Lasley said. “A lot of new faces, a big turnaround but the guys who have come in have worked hard and blended in with the group.

“It’s no coincidence you hear players talking about how welcoming not just the dressing room is, it’s the staff and the club as a whole.

“The manager puts a big emphasis on it being a welcoming place to come and work. And that makes a big difference to guys who are moving themselves and their families up to the area.

“It’s no secret if you’re feeling good off the park you often find your best on it.”

Motherwell have Chris Long back from a head knock for Tuesday’s trip to Dumbarton but Devante Cole remains out.