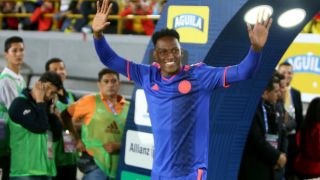 Colombia coach Jose Pekerman has hit out at Barcelona's treatment of Yerry Mina during his first few months in Spain, adamant he should have played more often.

Mina made the switch from Brazil's Palmeiras to Barca in January to much fanfare after establishing himself as arguably the best centre-back in South America.

But his transition to LaLiga has been difficult, with Barca coach Ernesto Valverde playing him just five times in the league.

Pekerman remained faithful to the defender by selecting him for the World Cup despite his lack of game time in Spain.

And he has assured Mina – who will start in the team's World Cup opener against Japan on Tuesday – that he and Colombia have no doubts about his capabilities whatsoever.

"We have no doubts about his skills," Pekerman told reporters in Saransk on Monday. "We've never had doubts.

"We trust him, he's confident, he's happy and he feels very well with the team. We also think that he's doing well and now that in the last few months in Barcelona he hasn't played much and that's not great, when he had to play they weren't many expectations.

"Football is very fast, a very fast paced game, we have to decide very quickly what you're going to do.

"It's true that during the preparation phase, all the midfielders knew that they needed to compete during the sessions.

"They know they need to be fit and join the team fully. They knew that we had to pick the best ones for the games.

"Those who are the fittest, but I really count on him for tomorrow's game, independently of how many minutes he will play.

"I think he's got a great future in world football. We know that the current situation is difficult because it's a very important club and he joined the club at a moment when they really wanted to play with just one play.

"It shouldn't be like that, football is a team game and when you have a team you have to play the same way."