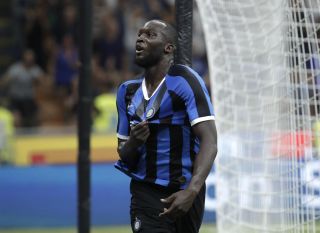 Inter Milan striker Romelu Lukaku is calling on footballers to take a united stance against racist abuse, saying the situation is getting worse, not better, after he was targeted by Cagliari fans on Sunday.

The Belgium star was racially abused by home fans as he took a second-half penalty, which he scored to give the visitors a 2-1 win in his second game in Serie A since joining Inter from Manchester United this summer.

This, however, was not the first time Cagliari fans have behaved like this in recent seasons, having also racially abused Moise Kean and Blaise Matuidi in previous matches against Juve and Ghanaian midfielder Sulley Muntari when he was with Pescara in 2017.

In a statement posted on his Instagram page, Lukaku noted that “many players” have received racist abuse in recent weeks and now he has, too.

“Football is a game to be enjoyed by everyone and we shouldn’t accept any form of discrimination that will put our game in game,” he wrote.

“I hope the football federations all over the world react strongly on all cases of discrimination!!! Social media platforms (Instagram, Twitter, Facebook…) need to work better as well with football clubs, because every day you see at least a racist comment under a post of a person of colour. We’ve been saying it for years but still no action.

“Ladies and gentlemen, it’s 2019, instead of going forward, we’re going backwards and I think as players we need unity and to make a statement on this matter to keep this game clean and enjoyable for everyone.”

Soon after Lukaku’s comments were released, Cagliari published a statement on their website and social media platforms.

It said Cagliari “firmly rejects” what happened and “underlines, once again, its intention to identify and ban those ignorant individuals whose shameful actions are completely against” the club’s values.

But having pointed out that most fans, from both clubs, had “enjoyed a lovely evening together”, Cagliari hit back at “the outrageous charge and silly stereotypes” directed at their supporters and Sardinians in general, “which are absolutely unacceptable”.

It concluded by saying: “Full solidarity to Romelu Lukaku and an even stronger commitment toward annihilating one of the worst plagues that affects football and our world.

“However, as we are aware that technology is not enough, we believe our commitment needs real support from the rest of football’s stakeholders: starting with all the true supporters, to all the stewards in the stands, from police and security staff, to the media and through to Serie A and the Italian FA.”

The PA news agency had earlier on Monday contacted Italian football Federation for comment but has so far received no response.

But as the 26-year-old Lukaku, who has also played for Chelsea, Everton and West Brom during an eight-year spell in the Premier League, pointed out, he is far from being football’s the only recent victim of racism.

This followed similar treatment for his team-mate Tammy Abraham and Manchester United duo Paul Pogba and Marcus Rashford – all after they failed to score penalties – and several other black players in the Premier League and Championship.

Both Chelsea and United have told PA that they intend to meet Twitter in the coming weeks to discuss the matter, while football’s anti-discrimination charity Kick It Out and the Professional Footballers’ Association had separate meetings with the social media platform last week.

The PFA’s deputy chief executive Bobby Barnes told PA: “We have commenced dialogue with them and it’s ongoing. We have strongly stated our views on protecting our members and the responsibility we feel all the social media platforms should take.

“Discussions have been positive and we hope that by working together we can start a process leading to much greater protection for players and serious consequences for those who post this vile racist abuse.”

It is understood, however, that underneath this diplomatic statement there is enormous frustration at the PFA, Kick It Out and elsewhere at the social media companies’ perceived failure to take this situation more seriously.

Last season, the PFA backed a 24-hour boycott of social media platforms by leading black players such as Raheem Sterling and it has been suggested something longer may be required.

Critics want the social media companies to be much more proactive in taking down discriminatory abuse, closing accounts and reporting cases to the police.

In response, a spokesperson for Twitter told PA: “We continue to take action on accounts which violate the Twitter rules.

“Racist behaviour has no place on our platform, and is a complex challenge. That’s why we are committed to working with civil society stakeholders to develop solutions to this unacceptable behaviour – both online and off.”