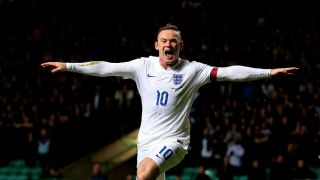 Wayne Rooney has ruled out a loan move to the Premier League in January and intends to end his playing career in the United States.

Rooney joined DC United in June and helped take them from the foot of MLS' Eastern Conference to the play-offs, where they lost in the first round to Columbus Crew.

With his season now over, the 33-year-old has been linked with a short-term switch to England but he has no desire to uproot his family again.

"I think I made the decision to go to the States and when I make a decision I tend to stick with it. It's important I give my full commitment to DC," he said.

"I've seen talk about a loan move back here, which I'm not prepared to do. My family are settled there, my children go to school there now and it wouldn't be fair to move them back and forth."

Rooney signed a three-and-a-half-year contract when he left Everton for DC and believes it will be his final destination in a glittering playing career that saw him win five Premier League crowns, an FA Cup and a Champions League title during a 13-year spell at Manchester United.

He added: "I'll finish my career there."

Rooney, England's record goalscorer, will make his 120th and final international appearance in a friendly against the USA on Thursday, with some of the proceeds from the match going to his charity foundation.