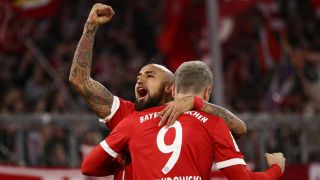 Jupp Heynckes told Arturo Vidal to shape up in order to get back to top form for Bayern Munich.

Influential midfielder Vidal opened the scoring and starred in a 3-0 win at Augsburg on Saturday.

Bayern sit six points clear of Schalke at the top of the Bundesliga, with Borussia Dortmund's faltering form lending an additional boost to their hopes of winning a sixth consecutive top-flight crown.

Things were not so rosy earlier in the season as Carlo Ancelotti was sacked in the wake of a Champions League thrashing at Paris Saint-Germain and Vidal was one of a number of key players short of their best.

Chile's Confederations Cup final defeat to Germany and subsequent failure to qualify for the 2018 World Cup appeared to have left the 30-year-old in something of a malaise.

Having taken the reins from the deposed Ancelotti, Heynckes told Vidal the route out of his predicament was some good old-fashioned hard work.

"I had a conversation with him two-and-a-half weeks ago," the 72-year-old said, as quoted by Bild.

"I told him that I was not so happy with his physical condition and that he needs to make a difference if he wants to play.

"He did not quite see it that way but, from that point on, he trained differently."

Bayern travel to Anderlecht in the Champions League on Wednesday with a place in the last 16 already secure.