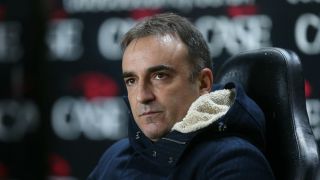 Swansea City have named former Sheffield Wednesday boss Carlos Carvalhal as their new manager to replace the sacked Paul Clement on an initial deal until the end of the season.

Clement was dismissed as Swansea boss earlier this month after a run of nine defeats in 11 matches left them bottom of the Premier League, with midfielder Leon Britton overseeing the last two games in caretaker charge.

The Welsh club have now turned to Portuguese boss Carvalhal, who was dismissed by the Owls on Christmas Eve having claimed just six wins in the Championship this term.

"We felt we needed to get the managerial situation resolved as soon as possible and while the timing is not always perfect, we can look forward to the second half of the campaign with renewed optimism," chairman Huw Jenkins told the club's official website.

"Carlos' time at Sheffield Wednesday, which included securing two consecutive play-off places, highlighted that he has great character and personality to lead the squad and the football club, which is vital at such a crucial time.

"He has built up a lot of experience over the years which will ensure the team is structured and organised.

"He is driven and ambitious and while he has a big challenge ahead of him, I know he will tackle it without fear."

Carvalhal's deal will run until June, with the club retaining an option to extend his stay.

The 52-year-old was appointed at Hillsborough in June 2015 following the sacking of Stuart Gray, and he led the club to the play-off final in his first season in charge where they were beaten 1-0 by Hull City at Wembley.

A fourth-placed finish last term led to another shot at the play-offs, but this time the Owls fell in the semi-finals to eventual winners Huddersfield Town on a penalty shootout.

However, a poor run of form this term, coupled with some abject performances, signalled the end of his tenure.

Carvalhal becomes Swansea's fifth permanent manager in two years and he immediately faces the unenviable task of trying to guide the strugglers to Premier League safety.

Swansea have won just three of their 20 league matches this season and are five points adrift of safety.

His first assignment is a trip to out-of-form Watford on Saturday.