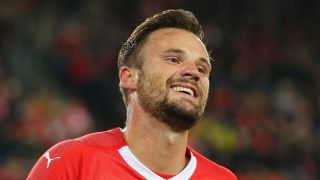 A Haris Seferovic-inspired Switzerland sensationally recovered from an early two-goal deficit to crush Belgium 5-2 and surge into the Nations League Finals in Lucerne on Sunday.

Roberto Martinez's men needed only a point to sew up top spot in Group 2 of League A and seemed right on course as Thorgan Hazard struck twice in the opening 17 minutes.

That left Switzerland – beaten 2-1 in the reverse encounter – needing an improbable four unanswered goals to advance, a mountainous task they had remarkably almost completed before half-time through Ricardo Rodriguez's penalty and a 13-minute Seferovic brace.

Such a stunning response set the scene for Nico Elvedi to head Vladimir Petkovic's side in front on the head-to-head aggregate score after the interval and their place in the final four was fittingly confirmed late on by hat-trick hero Seferovic.

They've done it! Switzerland 5-2 BelgiumSeferovic See you in the finals, !November 18, 2018

Belgium's mission appeared straightforward as the younger Hazard lit the fuse in the second minute.

The 25-year-old pounced on Elvedi's poor back-pass to open the scoring and doubled his tally with an unerring drive into the bottom-left corner.

Switzerland's first real incursion into the box from an Edimilson Fernandes cross enticed Nacer Chadli into a panicked trip on Kevin Mbabu and they used the lifeline to storm into the ascendancy.

And the incredible turnaround continued a minute before the break, Benfica striker Seferovic guiding beyond Courtois from Fernandes' cutback.

One more was required to secure an away-goals advantage and it was left to the unlikely Elvedi to seal the unthinkable by nodding in Shaqiri's 62nd-minute cross, star man Seferovic later adding polish to a gleaming Switzerland performance with a header of his own.

What does it mean? Martinez forced into the rethink

There is no question that Belgium are capable of turning on the style, but what remains in doubt is their ability to stem the flow when times are tougher.

The absences of Jan Vertonghen and Mousa Dembele were felt and Belgium's capitulation will cast doubt over the suitability of Youri Tielemans and Dedryck Boyata as replacements.

Shaqiri the standout amid stunning drama

Switzerland had no shortage of heroes but it is impossible to imagine their astounding recovery occurring without Shaqiri, who expertly assisted two goals and posed endless problems.

Seferovic, of course, will console himself with the match ball.

Several months on from the World Cup, Martinez is still yet to unearth a capable wing-back to plug his vulnerable left flank.

Monaco man Chadli is not the answer. The natural attacker is clearly uncomfortable in defensive areas, into which he was pressed often during an unconvincing 65 minutes.

With no matches presently on the horizon, both coaches can pause for thought ahead of the Euro 2020 qualifying draw in December.