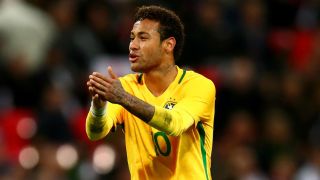 Brazil star Neymar says he must overcome his own fears regarding his return from injury as Russia 2018 moves sharply into focus.

The Paris Saint-Germain forward has been out of action since suffering a broken metatarsal against Marseille in late February but is seemingly on track to be fit for the Selecao's World Cup campaign.

Neymar has unpleasant memories of World Cup injury woe, having missed Brazil's 7-1 semi-final humiliation at the hands of Germany four years ago with a back problem sustained in the last-eight win over Colombia.

Brazil's opening Group E fixture against Switzerland takes place in Rostov on June 17 and Neymar says he must conquer his own mental frailties if he is to shine in Russia.

"Expectations are big ahead of the World Cup," Neymar told Zico, in an interview for the former Brazil international's official YouTube channel.

"Everything's going well, thanks to God. I started to walk again, yes, but I have fear of returning.

"What I should do is get rid of that fear as quickly as possible to get to the World Cup in good condition.

"The start is bad, people have fear of making any wrong movement but bit by bit you make it back."

And Neymar rejected the notion that PSG head coach Unai Emery ought to have rested him more often in order to protect the world's most expensive player.

"I was going to rest in the next game," said Neymar. "The one after the injury, because we had two important games after that against the second best team in France, Marseille, and then the cup semi-final, and then another rest.

"I spoke to him two days before. Unfortunately I ended up getting injured. But this year is the least I've played, because the coach gave me so many rests."