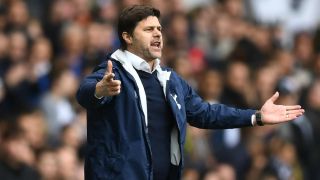 With nine consecutive wins in the Premier League and the chance to close to within a point of leaders Chelsea, Spurs made the short trip to Stratford and stumbled horribly. Manager Mauricio Pochettino needed nobody to tell him that.

"To win a league or a trophy is a key moment," he said afterwards. "Today was a key moment. It's not about to play good or bad or to run more or less, but when you win, you win. If you want to be champions, you must win."

That said, the fallout from the match has descended very much on two sides. For all those crying 'bottle job' for the second year in a row, there are many scoffing with disdain at the idea that Spurs should be criticised for falling short in the title race with three games left, especially given that every other (richer) big side has given Leicester City and Chelsea free rein in the last two years.

Yet Pochettino knew that criticism was warranted. Indeed, he should welcome it. He deserves to be tarnished with the same brush that has smeared Arsene Wenger, Pep Guardiola and Jose Mourinho all season.

To say otherwise would be to compare Spurs to their 2010-11 vintage, the top-four usurping Everton of 2005, or last season's Leicester – the hangers-on who were happy to upset the establishment once and do little but savour the memory. If this team and this manager are to live up to the tributes, we're entitled to expect much more.

Since taking charge in 2014, Pochettino has managed sustained progress unseen anywhere else in England's top flight. In his first season, Spurs finished fifth, losing 12 games and registering a goal difference of five. A year later, they were third, with five defeats from 38 matches and a goal difference of 34.

They have already surpassed that points tally by seven this term and a draw on Sunday against Manchester United will see them reach 78 in the top tier for the first time in their history. They are certain to finish above Arsenal for the first time since Wenger's arrival across north London.

They have scored more than anyone bar Chelsea this term and conceded the fewest of all. They are one result short of going unbeaten at home throughout a league season for the first time since 1965. And all this has come about with a team whose wage bill is reportedly fifth-highest in the division and whose net transfer spending in the last year has come to less than £30m.

Plenty would argue that this should make them immune to heavy criticism after a 1-0 loss to West Ham on a Friday. Actually, it should encourage it.

Pochettino has dragged and moulded Spurs into a certifiable top team and deserves everything that goes with it, including the odd haranguing when results go awry. And so they have.

The steady march of progress has met several bumps in the road. There was an EFL Cup final defeat to Mourinho's Chelsea in 2015, Leicester knocked them out of last season' FA Cup. This term, they lost 4-2 to Chelsea in an FA Cup semi-final at Wembley just a week after Antonio Conte's side were shown to be far from invincible at Old Trafford.

Europe has told a far sorrier tale. Fiorentina and Borussia Dortmund put paid to Europa League campaigns in the early knockout rounds in Pochettino's first two seasons in charge. This term, a paltry two wins from six against Monaco, Bayer Leverkusen and CSKA saw them drop out of the Champions League group stage and into the Europa knockouts, where they were immediately ousted by Gent.

Even their largely exemplary league form is far from perfect. They've lost to Liverpool, United and Chelsea this season and their 2-0 win over Arsenal last week was their only one against the rest of the top six.

For a team with the expectation level that Pochettino has created, that's a long way from acceptable. It has become the norm for Arsenal, whose dreadful record against their title rivals and dismal European showcase has led to protests around the world against Wenger.

The Gunners alleviated some of that pressure with a 2-0 win against a United reserve side. Spurs can do likewise against Mourinho's men this week. But do they really want to be in that same position, with their manager smiling from a car window, supportive photograph in hand, after a home win against the B team of a side now sitting in sixth? After all, Harry Kane stated only two weeks ago that Spurs have "bigger things to look forward to" than outstripping the north London enemy.

Compare Pochettino's season to Mourinho's, too. It's been a confounding year at Old Trafford but one that few will consider successful: missing out on the top four and a run of draws bordering on the hilarious - not to mention after all that summer spending - has made certain of that.

Yet United have won the Community Shield, the EFL Cup and reached the final of the Europa League. Mourinho could end his first season in Manchester with three trophies and Champions League qualification and earn a collective shrug. Such is the life at an elite club; a life to which Pochettino has left himself exposed.

There will be a poignant Farewell Ceremony at White Hart Lane after Sunday's match v Man Utd - May 10, 2017

Sunday is a momentous day for Spurs, even though Chelsea will have the title wrapped up if they win 48 hours earlier. It's their final match after 118 years at White Hart Lane and a ceremony will follow the final whistle. A win will see them equal a club-record run of 14 victories at home in a row and guarantee a top-four finish.

It comes against United, too, just as West Ham's last game at Upton Park did a year ago. The Hammers won that one and there's every reason to expect the hosts to prevail again this time, especially with Mourinho certain to field another weakened side after Thursday's Europa League semi-final second leg.

But when the celebrations begin after the final whistle, when Spurs fans are told to mark the "past, present and exciting future" of their club, they should not forget that Pochettino has encouraged them to expect bigger things than a comfortable home win when the pressure is off. After all, their biggest rivals have spent the best part of a decade doing just that. And when have Spurs ever wanted to be like Arsenal?

SPURS DON'T LIKE PLAYING UNITED - BUT THEY LOVE FACING MOURINHO

Mourinho might have the upper hand in recent cup meetings but his record against Spurs is not one to shout about. What's more, his side have found it hard work even to score a goal away from home against the Premier League's big boys in 2016-17.

Having said that, United have fared extremely well against Sunday's opponents (ignoring last year's 3-0 drubbing) and have limited Harry Kane to a frustrated bystander role. The below Opta stats certainly paint an interesting picture...

0 - Jose Mourinho has failed to win on his last four Premier League visits to White Hart Lane (D2 L2) and hasn't won a league game there since August 2005, when his Chelsea side defeated Spurs 2-0. He hasn't seen his side score in an away league game against any of the current top six clubs since January 1st 2015 in a 3-5 defeat at Tottenham while Chelsea manager. Four of the seven games since have finished 0-0 (L3).

23 - Harry Kane has scored against 23 of the 25 clubs he's faced with Tottenham in the Premier League but he's yet to score in six appearances against Manchester United.

3 - Three of Manchester United's four Premier League defeats this season have been in games played on a Sunday immediately after a European match.