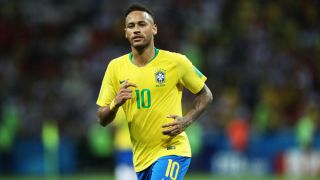 New Paris Saint-Germain coach Thomas Tuchel is wary about discussing Neymar in public as he feels he has to be "careful" following the Brazil star's World Cup criticism.

Neymar was consistently at the centre of attention in Russia, with his performances being put under the microscope and his behaviour often commented on too.

The former Barcelona star received flak for his theatrics at the tournament, with then Mexico coach Juan Carlos Osorio calling him an "actor" for his overreactions to challenges and fouls.

Tuchel is yet to meet up with the Brazilian since officially taking charge of first-team operations, but is planning on holding private talks with Neymar when he joins up with the squad.

When asked about whether he will talk to Neymar about his perceived theatrics, Tuchel said: "I must be careful what I say when I speak about Neymar.

"Anything I say about him will be done in a closed space with two ears and two mouths only.

"I know that I have a privileged link with Neymar and I am sure that we will be able to do great things."

Adrien Rabiot is another who has had a somewhat turbulent close-season, having asked to be taken off France's list of reserve players prior to the World Cup, before then becoming the subject of regular transfer talk.

Barcelona are said to be particularly keen on him and Rabiot's future is uncertain due to being in the final year of his contract, but Tuchel wants the midfielder to come out and make a decision.

"I am certain that Adrien can still bring a lot to this club - his club," Tuchel told reporters.

"It is important to have a youth academy graduate at this level. However, he needs to come out and say that and that is still a big but."