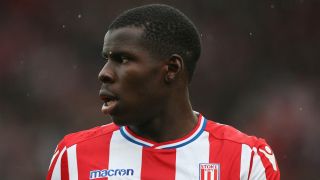 Ryan Shawcross considers Kurt Zouma to be one of the Premier League's best defenders and was surprised Chelsea allowed him to join Stoke City on loan.

Zouma suffered a serious knee injury in February 2016 and struggled for playing time at Stamford Bridge after returning to full fitness.

The 23-year-old has started 10 of Stoke's 11 Premier League matches, though, since moving to the bet365 Stadium on a season-long loan deal in July.

And his Potters team-mate and fellow defender Shawcross feels the France international ranks among the best in his position in England's top flight.

"He's quick, he can jump really high, he can pass the ball, he can shoot, he doesn't get beat one-v-one. He's like the ultimate defender," Shawcross told the Sentinel.

"I think [Tottenham's] Toby Alderweireld and Kurt are the top two centre halves in the country at the moment."

With Zouma at Stoke, John Terry having left for Aston Villa and David Luiz falling from favour, Chelsea boss Antonio Conte has struggled to achieve the defensive solidity which helped his team to win the title last season.

"I wasn't surprised we got him because obviously we've got a good link with Chelsea, but I was surprised they let him go just because they've not had the greatest starts and I really do think he's going to turn out to be one of the top centre halves in the country," Shawcross said.

"For them to let him go to us is fantastic for us, but surprising.

"I think Kurt has done brilliantly. He's played a lot of games previously and it's a great test for him to come here."