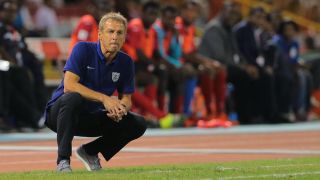 Pressure is mounting on United States coach Jurgen Klinsmann as the team prepares to host Guatemala in a World Cup qualifier in Columbus, Ohio.

A 2-0 defeat to the same opponent in Guatemala City on Friday left the US third in Group C, three points adrift of Trinidad and Tobago and two behind Walter Claveri's men at the midway point.

Klinsmann's only win of the campaign so far came at home to group whipping boy Saint Vincent and the Grenadines, which has conceded 13 goals in its three matches.

A 6-1 demolition of the minnows in the opening game offered little hint of the struggle that was to come and the failure to pick up a win from trips to Trinidad and Guatemala has prompted some to call Klinsmann's position into question.

With the top two progressing to the next stage of qualifying, Klinsmann's men will still be expected to make it through – home ties against Guatemala and Trinidad, along with a trip to Saint Vincent should make it an easier run-in.

But amid criticism of his team selections and tactics, Klinsmann concedes he must ask questions of himself.

"Absolutely you question that and you figure out how you can fix this, this and this."

Addressing the defensive lapses that led to Guatemala's two goals, Klinsmann added: "At the end of the day, these two mistakes led to goals. You just have to swallow it, because those are individual mistakes that you cannot do at this level. That's what happened so we'll take the blame. I take the blame. There's no problem if you want to hear that."

And Bradley says his side can take nothing for granted.

"It is never easy," he is quoted as saying by USA Today. "No one on the inside expects it to be. For different people, they turn on the television every four years and watch World Cups and see us there and think we have a divine right to be there. Obviously anybody who is in it every day understands that is not the case.

"These nights are part of it. We will make sure the response is right, look at ourselves in the mirror in an honest way and know things were not good enough but be ready on Tuesday."