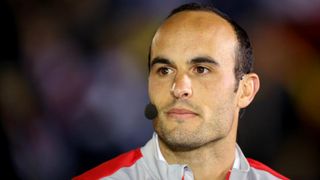 The United States are not even among the top 20 countries in the FIFA rankings but the nation's all-time leading goalscorer Landon Donovan believes they can win the World Cup in his lifetime.

In 10 appearances, USA have only ever advanced to the quarter-finals of the showpiece event on one occasion - at the 2002 tournament in South Korea-Japan.

Jurgen Klinsmann and Co. won through to the last 16 in Brazil two years ago, but went out against Belgium following a 2-1 loss in extra time.

But as USA prepare for next month's Copa America Centenario with an international friendly against Ecuador on Wednesday, Donovan believes the Americans can reign supreme on the world stage.

"In each World Cup, to do it [win it], you need a lot of luck in addition to excellent preparation. While Brazil and Germany can have four regular [average] matches in a World Cup and two excellent ones to be World Cup champions," the 34-year-old, who scored 57 goals in 157 appearances for USA, told Mexican news agency Notimex.

"Teams like the USA and Mexico need to play great games and then it can happen [that they win the World Cup].

"Mexico has several decades playing in World Cups and hasn't won it and the United States has only been to some World Cups.

"But I believe that I'll see the United States as world champions."

Host nation USA will kick-off the Copa America against Colombia on June 3, followed by matches against Costa Rica (June 7) and Paraguay (June 11) in Group A.